Posted on August 6, 2014 by myfamilytravelsblog

South Padre Island is one of the most famous spots in Texas.  During Spring Break, tens of thousands of students descend on this small town and the place is transformed into a non-stop party.  We’re a bit too wise (read: old) to enjoy such a scene so we made our way during the month of July when it becomes a family hot-spot.  The area is expensive during the summer but not outrageously so. We stayed at The Pearl, which although billed as a luxury hotel, just wasn’t.  We’ve certainly stayed at worst places but we’d still opt for a different hotel next time around. The personnel working there were all very nice though and the proximity to the beach is probably one of the best.  Which brings me to the true reason to visit South Padre: the beach.  The sand is fine and soft, it might not be Caribbean white but it feels just as nice between your toes.  The ocean water is transparent and, during our time there, warm.  Waves are mild which allows one to swim lazily in the ocean, not to mention that the shore remains shallow for a long distance making it a good spot to bring children to.

Sure enough, the place is full of families happily building (what they hope will pass for) sand castles.

The hotel does not provide beach chairs or umbrellas (nor beach towels) so you’ll be charged between $20-$30 if you’d like to use the ones provided by a separate vendor. We noticed that most families simply bring their own EZ-Ups and chairs and proceed to set their tents right in front of these umbrellas thus blocking the view others have paid for.  We’d never seen that before so we were not as well prepared but we catch on quickly.  When we saw this happening around us, we set some towels, sandals and anything else we could gather in the space in front of our umbrella with the result that families set their tents to both sides of us but not in front.  The beach is long though so don’t despair if it happens to you, just move a bit further down; you’re sure to find another good spot.

Water sports, fishing and dolphin watching are some of the other activities available to you here.  In case you suffer from sea-sickness, dolphins can easily be seen from the bridge crossing over from Port Isabel, no need to get on a boat.  Deep-sea fishing though has no run-around.  The boys decided to go para-sailing while we relaxed on the beach. They claim to have been able to see the refinery from up there, I suppose that’s not really a selling point but it is an exciting experience regardless.

The reason behind our desire to visit at this time is an event which occurs every summer and which we, since we don’t usually spend summers in Texas, hadn’t been able to witness until now (drum-roll please): the sea turtle hatchling release. 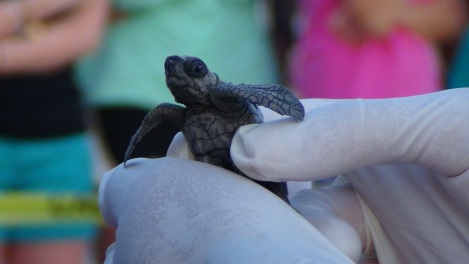 During the period from April-August, Kemp’s Ridley Sea Turtles deposit their eggs on the beaches of Tamaulipas (in Mexico) and Texas (in the USA). Kemp’s Ridley Turtles do this during the daytime, in contrast to all other sea turtles which do so during the night. The arrival of the turtles to the beach is known as the “Arrivada” which means to arrive, in Spanish.  Due to man activity, the Kemp’s Ridley Turtle is critically endangered and its arrivadas aren’t as plentiful as they used to be, you can watch a video of the last filmed event here from 1947. What a wondrous sight that must have been.

During these summer months, personnel from Sea Turtle Inc. comb the beach looking for nests. When these are spotted, the eggs are relocated into a secure area where they are protected from predators and humans alike. About 45 days later, the baby turtles begin to hatch.  Once most of these baby turtles are ready, they begin a frenzy which is a burst of energy allowing the hatchlings to make their way out of the nest and toward the sea.  As this happens, Sea Turtle Inc. personnel collect the hatchlings and transport them to the beach where they are released.

When this frenzy occurs close to dawn, a public release is held and anyone has the amazing opportunity to watch it happen.

It is the turtles that decide when they will frenzy so a viewing is never guaranteed. However Sea Turtle Inc. has a phone number set up for you to call and find out if the release will happen. Some tips about this hotline though: the hotline is updated around 5:30am but this does not mean you must get up at 5:30am to call.  The public release, if there is one, will happen around 7am so you could wake up around 6:30, call and still have time to make it there. The number tends to get busy so a safer bet is to like them on Facebook and check your timeline for the announcement.  The release is held at beach county access #3, parking is available and it’s only a few steps to the beach. Volunteers set a perimeter line but don’t fret, they will bring the hatchlings over for you to take pictures to your heart’s content before letting them go. 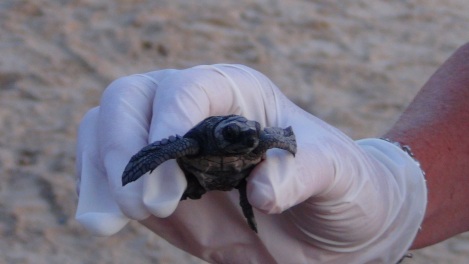 Releases happen at various dates during the summer as the nests hatch at different times. There were not that many people in attendance when we were there but we were told we were lucky as the previous weekend had seen upwards of 400 people gathering for the release.

Once they are let go, the tiny turtles make their way toward the rising sun, some faster than others and some seem completely lost as to what they are supposed to be doing. 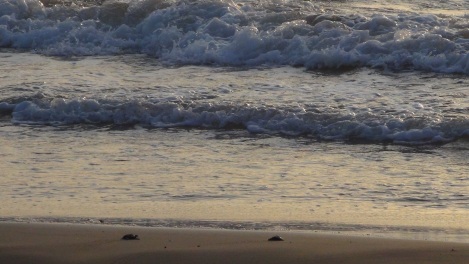 One even settled in a small pool of water which had collected on the beach as if it was home already and it had to be coaxed forward.

After a bit, gulls get wind of what is going on and begin circling overhead. None of them tried to pick up any hatchlings though, maybe having so many humans keeping guard is not such a bad thing for the turtles.  We did see one gull dive into the ocean and fly up with a hatchling in its beak, but it was just one out of dozens so I’d call that success. Even gulls have to eat after all.

Sea Turtle Inc. also works to rehabilitate other kinds of turtles and provide educational programs for the community, please check them out if you’re in the area. Numbers are not even close to what they should be for the Kemp’s Ridley Turtle but thanks to efforts from organizations like Sea Turtle Inc. there is reason for hope. Maybe we will be lucky enough to witness an “Arrivada” in our lifetime but in the meantime attending a hatchling release is sure to leave you with a heartening feeling for the rest of your visit to South Padre Island.